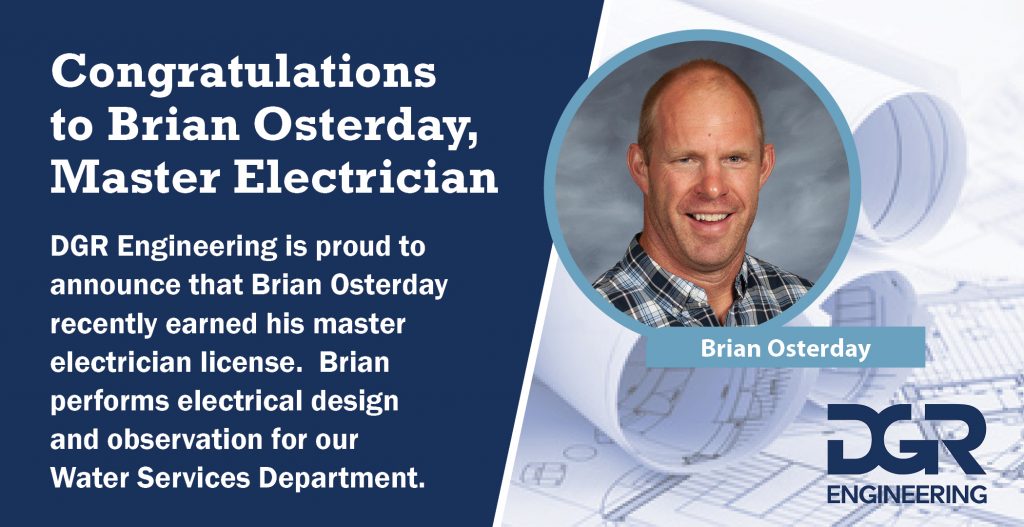 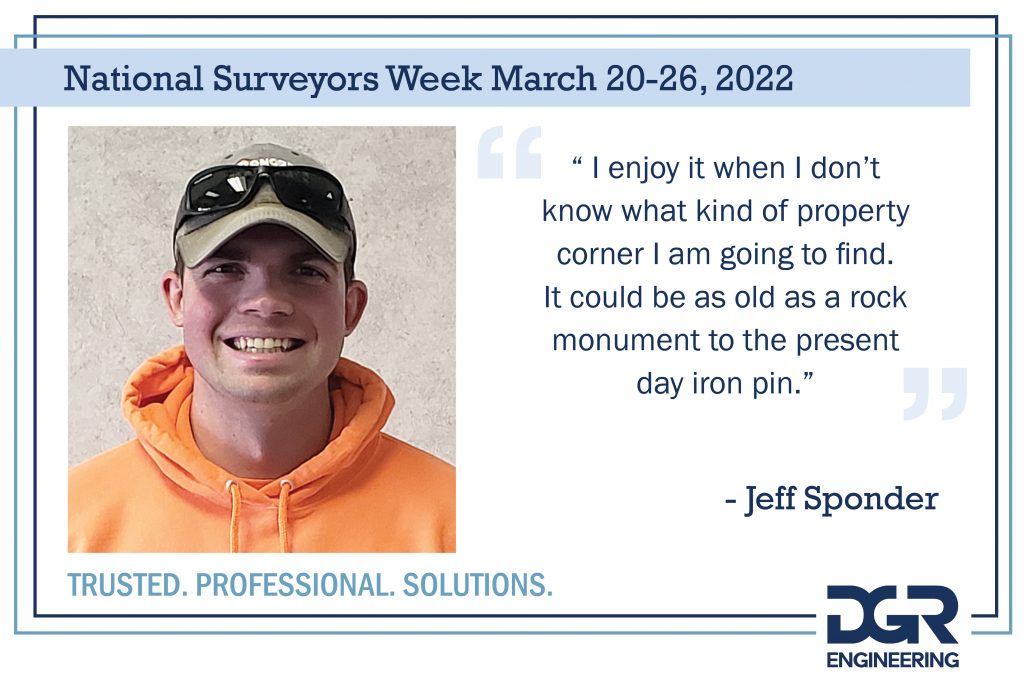 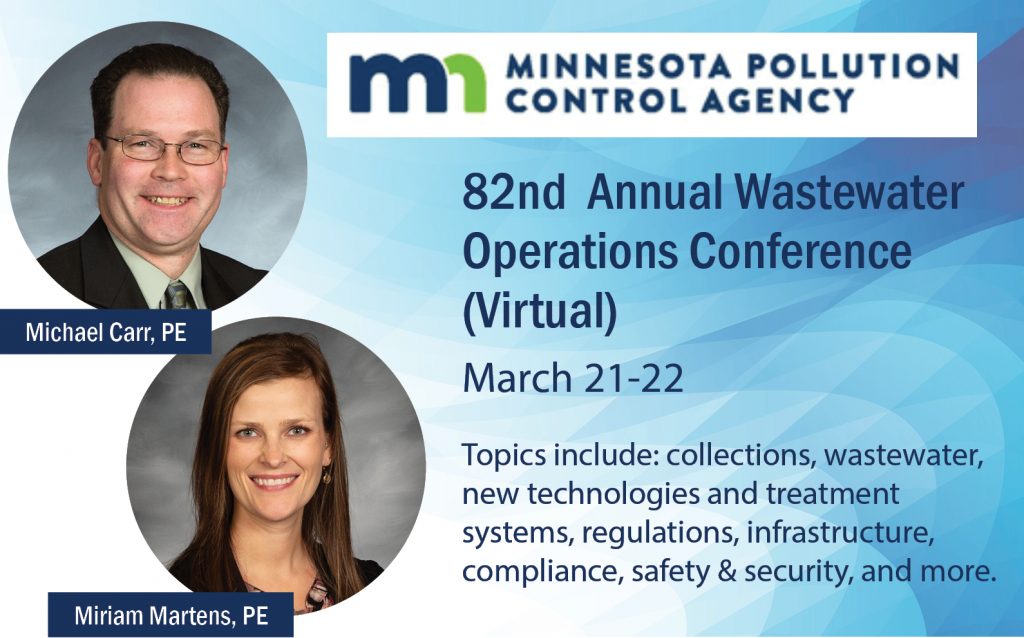 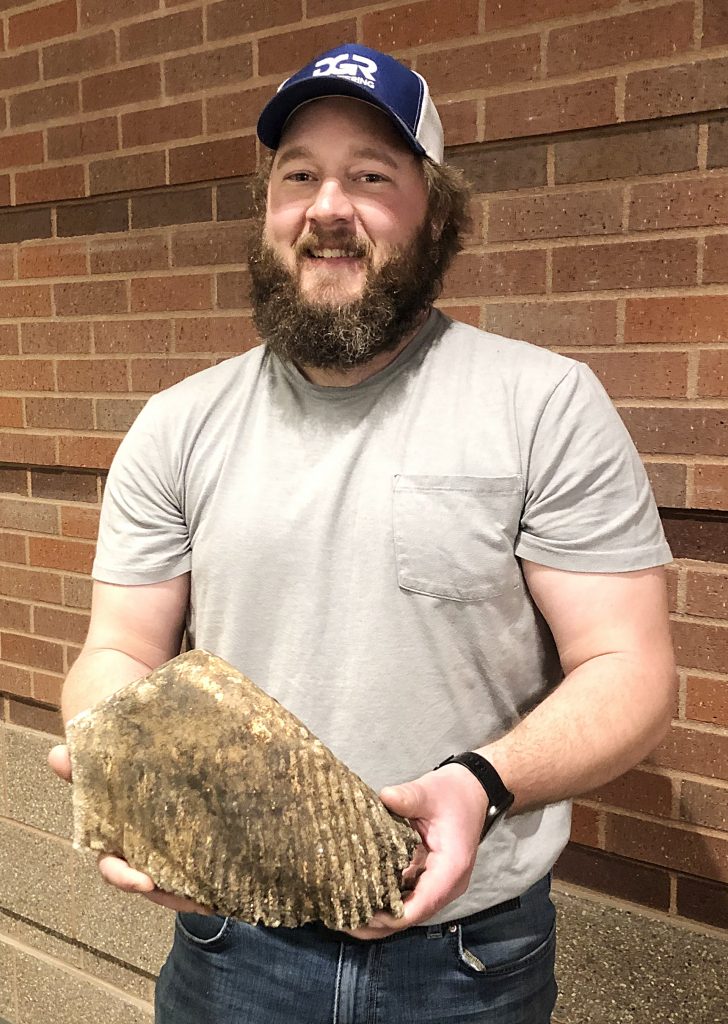 Sheldon, IA – DGR Engineering’s Justin Blauwet made a once-in-a lifetime discovery Friday, March 4, 2022 at a construction site on property owned by Northwest Iowa Community College (NCC) in Sheldon, IA. While performing construction observation on a lift station project for the City of Sheldon, Blauwet discovered what was later confirmed to be a woolly mammoth tooth lying on the ground, clearly exposed during excavation.

When asked how he was able to identify the distinct tooth, Blauwet responded that he has always been interested in fossils and pre-historic animals, even more so now as his two young sons have shown a huge interest in dinosaurs. “I’m a ‘nerd’ like that,” he joked.

Following the find, DGR staff contacted Paleontology Repository Instructor at the University of Iowa, Tiffany Adrain, for professional confirmation that it is a tooth from a woolly mammoth and to understand the proper reporting protocols. It was determined that since the construction project is locally funded, the City of Sheldon had no obligation to report the finding.

“While discovery of mammoth remains is not uncommon in Iowa, once the bones and teeth are out in the open, they can fall apart and disappear quickly because they are not completely fossilized. This was a lucky find,” Adrain commented. She also offered instructions on how to preserve the specimen, since it is likely waterlogged after being preserved in the ground since the last glacial maximum which is suspected to be over 20,000 years ago. Measures are being taken to protect the tooth from drying out too rapidly and possibly disintegrating.

The tooth measures 11”x7”x4” and weighs 11.2 pounds. Additional information on the tooth was obtained from Chris Widga, Head Curator at East Tennessee State University: “This is an upper 3rd molar, probably a right. Based on the degree of wear, this animal was probably in its early 30s when it died.”

Sheldon Public Works Director Todd Uhl and City Manager Sam Kooiker are excited about the find, and believe the tooth belongs to NCC. They have suggested NCC offer the tooth to the Sheldon Prairie Museum for permanent display.

Dr. John Hartog, NCC President, said, “NCC already has many connections with its communities forged throughout the past half-century. When Blauwet discovered this woolly mammoth tooth, it uncovered an even deeper connection – one that now ties our campus property way back to the prehistoric era of the retreating glaciers! Since NCC is the public college for all of its communities, we are happy to display the tooth in the Sheldon Prairie Museum as a semi-permanently loaned display. This way, everyone from across our service area can come to the museum to see and appreciate this artifact. We might display it at the College for special occasions, but we will house the artifact in the Sheldon Prairie Museum.”

Hartog continued, “The tooth itself serves as a dramatic reminder of the power of partnerships: DGR Engineering, an industry partner, found the tooth during an excavation project for the City of Sheldon, a municipal partner, while digging on the property of the College. The College will house its tooth in a museum, an educational partner, so everyone can enjoy it. This is an example of how great results come from dynamic partnerships in northwest Iowa.”