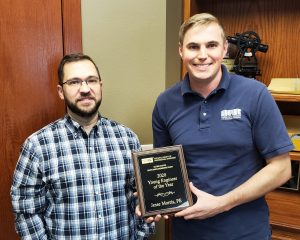 Congratulations to our very own Jesse Morris, right, on being named the SD Engineering Society (SDES) – Eastern Chapter’s Young Engineer of the Year! Jesse is a civil engineer in the Sioux Falls Office.

Jesse’s engineering achievements, as well as his volunteer service to various organizations, including his role for several years as South Dakota state coordinator with MATHCOUNTS earned him this recognition.

The award was established to recognize young SDES members who have made outstanding contributions to the engineering profession and their communities during the early years of their careers. Jesse is pictured with Weston Philips, representing SDES – Eastern Chapter, who presented the award.