Bid Package 1 (BP1) included building and site demolition, utilities and grading which included over-excavation and re-compaction of soils below proposed building footings and foundation, retaining walls and paving. Also during this time, Jennings Street, 31st Street and Jones Street, which were similar in age to the existing school, were reconstructed in a partnership agreement with the City of Sioux City. Along with street reconstruction, the utilities were replaced. A total of approximately 1,675 linear feet of street including four intersections plus 200 linear feet of relocated City alley through the site was replaced. Work on BP1 was completed in fall of 2017. 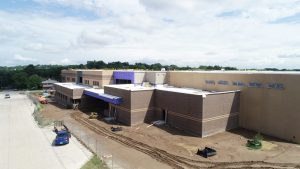 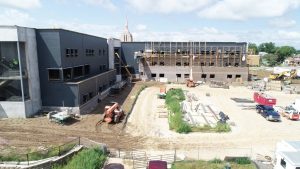 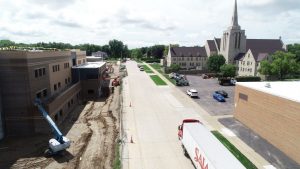 MBBR technology was chosen based on cost, operational flexibility and most importantly, limited land availability.

DGR employed a Geographic Information System (GIS) in conjunction with the U.S. Army Corps of Engineers to first determine the 100-year flood elevations and delineate the floodway boundaries.

The City ultimately determined a flow-through style SBR system to be the preferred choice based on the selection criteria and the ability to meet anticipated permit limits.