In order to revitalize the Pearl Street Corridor and promote redevelopment in the city, Sioux City began a multi-phase, multiple-year project to replace paving and aging utilities and install new sidewalks, decorative street lights and traffic signals where needed.

Since the soils were soft and drainage was minimal, subdrains were installed along each side of the street under a drainage base.  The subdrains were connected to the proposed storm sewer system.

DGR Engineering was selected as the most qualified firm to provide the design services for each of the three phases of the project. The projects included investigation of existing utilities in the area that in general were over 100 years old and planned improvements for utilities, paving, traffic signal and streetscaping items.  Colored concrete, ornamental trees, and decorative light poles were included in the project design for Phases II and III.

Phase I included coordination with the Prime Living construction project between 7th and 8th Streets that was under development as well as the reconfiguration and reconstruction of the skewed intersection with W 7th Street in order to improve turning movements and align the through movements with 8th Street to the east of Pearl Street. Phases II and III included coordination with many of the property owners along the street to close up area ways (basements that extended in the public right of way under the sidewalks) in order to replace the deteriorating sidewalks.

Phase III was delayed several times due to funding issues, but ultimately was fast tracked to bids with the added reconstruction work on 3rd Street from Water Street to Pearl Street and utility relocation work to be completed in time for the opening of the new Hard Rock Casino. 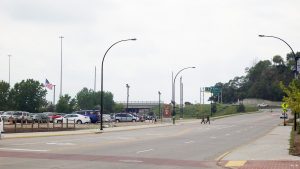